We provide for control, eradication, disposal and monitoring of invasive weeds on amenity, industrial, commercial and residential sites.

We can design and implement invasive weed management solutions specific to each individual site and follow this up with re-mediation works from site clearance to new landscaping schemes.

Our team of NPTC certified staff can carry out a range of treatment options specific to your site as follows: 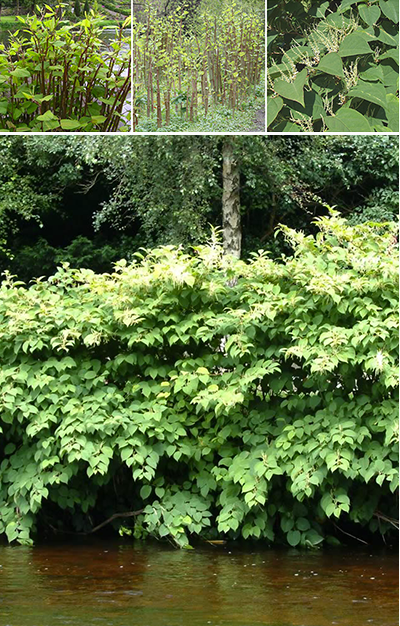 What is Japanese Knotweed?

Japanese Knotweed (Fallopia japonica) is a strong growing, clump forming perennial with tall dense annual stems. In winter the plant dies back beneath ground. Stem growth is renewed each year from the stout deeply penetrating rhizomes (creeping underground stems) and by early summer the bamboo like stems shoot to over 7ft suppressing all other growth.

The stem structures are distinctive with a green hollow bamboo like appearance and dotted with dark blue purple speckles. Leaves are oval with a pointed tip and have a distinctive zig-zag growth pattern on the stem.

The off coloured flowers are small and clustered and hang from the joint of the stem and the leaf. They are wood like in there appearance. If snapped they show a bright orange colour inside and have a consistancy similiar to that of a carrot. New rhizome growth is white in appearance and can be delicate. These root structures can extend up to 7m in a lateral direction and 2m deep from the over ground plant. 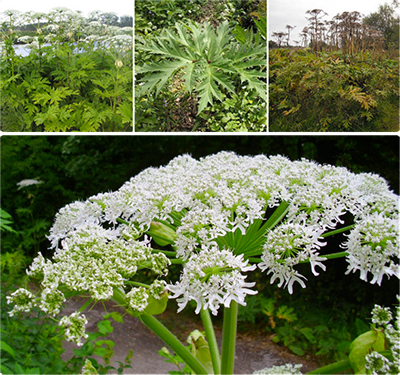 What is Giant Hogweed?

Giant hogweed (Heracleum mantegazzianum) can reach over 3m in height. It is highly invasive and the sap can cause severe skin burns. It is widely distributed in the wild and poses a serious risk to people who are unaware of its potential for harm.

It is a tall cow parsely like plant with thich bristly stems that are often purple blotched. The flowers are white in flat topped clusters. The flower heads can be as large as 2ft acrodss. It can reach a height of 3m or more and has a spread of 1-2m.

Highly invasive with the ability to out compete other vegetation, the sap can cause severe skin burns. 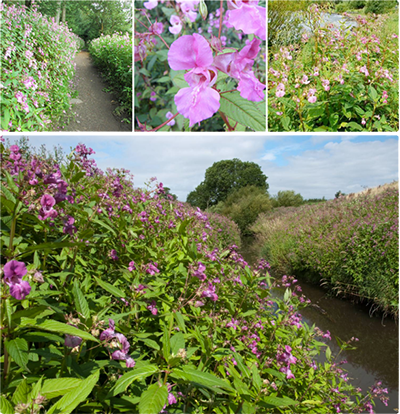 What is Himalayan Balsam?

Himalayan balsam (Impatiens glandulifera) is a major weed problem especially on riverbanks and waste land but can also invade gardens. It tolerates low light levels and also shades out other vegetation so gradually impoverishing habitats by killing off other plants. It is sometimes seen in gardens either uninvited or grown deliberately.

Himalayan balsam is a tall growing (2-3m) annual. Between June and October it produces clusters of purplish pink helmet shaped flowers. The flowers are followed by seed pods that open explosively when ripe.

Each plant can produce up to 800 seeds. These are disperesed widely as the ripe seedpods shoot there seeds up to 7m. Once established in the catchment of a river the seeds which can remain viabile for two years are transported further afield by water. Once established they will out compete and smother all other vegetation.